6 Cognitive and Neurological Impacts of Trauma 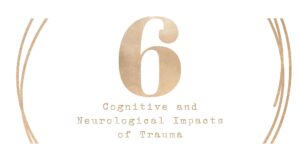 Many are unclear about what trauma is. Trauma is subjective, meaning anything can traumatize a person if the event(s) impact the victim’s nervous system and emotional and psychological well-being and are perceived as traumatic. Trauma effects all people without discrimination of age, race, sex, ethnicity, religion, or nationality. Approximately 70% of the human population will experience at least one traumatic event (Kleber, 2019). Not all traumas are ‘big T’ (abuse, violence, war, natural disasters); they can also be ‘little t’ (loss of a job, a breakup or divorce, death of a pet). Trauma can be interpersonal, accidental, collective, or a natural disaster. Trauma can be a single incident or prolonged and recurrent. The topic of trauma is a complex dive into humanity, psychology, anatomy and physiology, neuroscience, pharmacology, and sociology. Often, trauma is intergenerational and transgenerational, passed down through families, society, and culture. The science of trauma is a rapidly growing field of applied research thanks to newer technologies that help conceptualize the neurological impact of trauma, such as fMRIs (Van der Kolk, 2015). Hope, help, and healing are available for those with traumatic experiences, depression, anxiety, and PTSD; it is possible to experience posttraumatic growth (Wamser-Nanney et al., 2018). 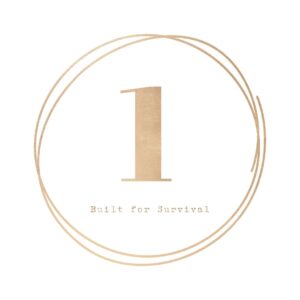 The human brain is created for survival. The evolutionary development of the brain from the bottom up, beginning with the brain stem and limbic system, purposed for involuntary and autonomic functions such as breathing, heart rate, nervous system response, digestion, sleep, vigilance, and fight/flight/freeze (van der Kolk, 2015). The prefrontal cortex is the slowest developmentally and the newest evolutionarily (p.59). The prefrontal cortex’s responsibilities include decision-making, problem-solving, rational thought, judgment, intelligence, and emotion regulation (p.58). Trauma’s cognitive and neurological impact results in hyperactive and hypoactive functioning. Dysregulation in the brain results in flashbacks, dysregulation, panic disorders, insomnia, dissociation, and more. In addition, the neurological impact of trauma makes daily tasks increasingly difficult impacting executive functioning (p.62). 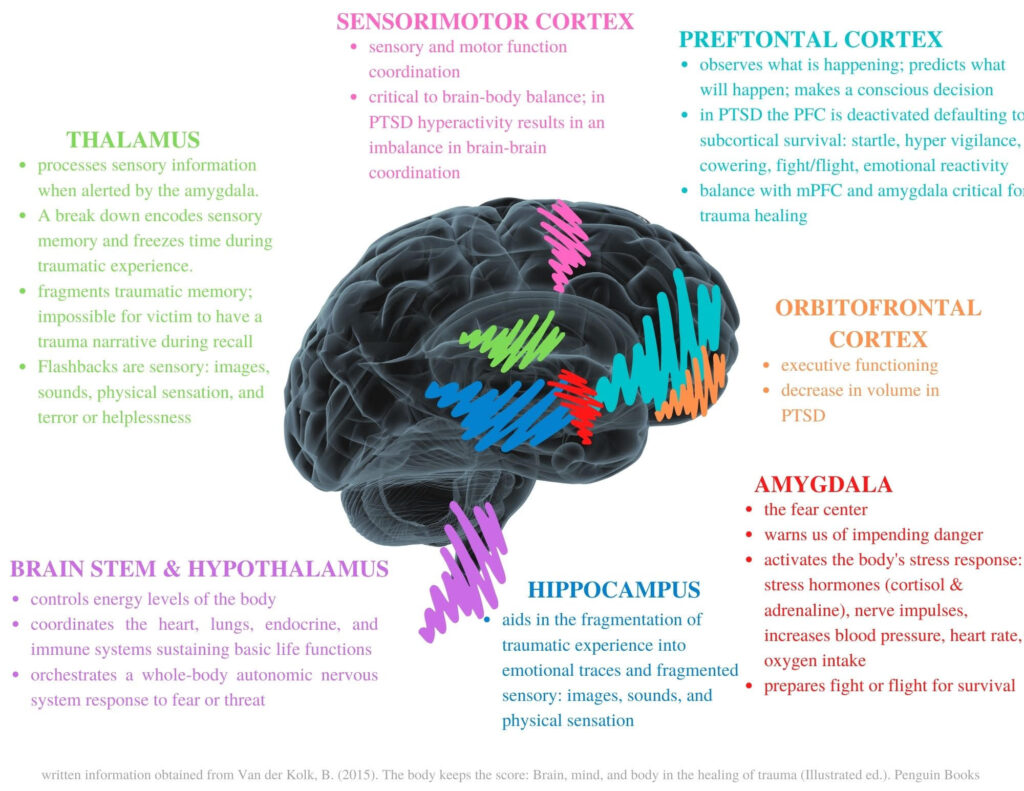 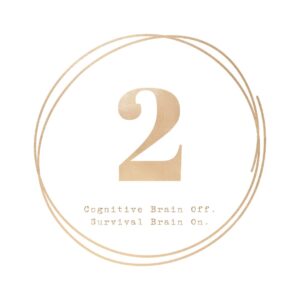 Trauma victims find it difficult and, at times, impossible to regulate and control their thoughts, emotions, and behaviors. This experience is due, in part, to the limbic brain’s response to trauma and perceived trauma (posttraumatic stress response), which temporarily shuts down the cognitive parts of the brain to focus on survival (Van der Kolk, 2015). Until trauma is resolved, a trauma survivor can experience triggers throughout life that episodically shut down the prefrontal cortex. Once shut down, the survivor becomes stuck in trauma and behaviorally reactive (p.60). The limbic brain is emotionally intense and reacts in microseconds outside of conscious awareness for survival. The more intense the emotional brain reacts to a perceived threat, the less cognitive control a person has to make regulated, balanced, and controlled decisions resulting in impulsive behaviors and decisions that can cause shame to the self or hurt others. 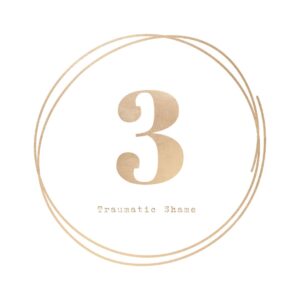 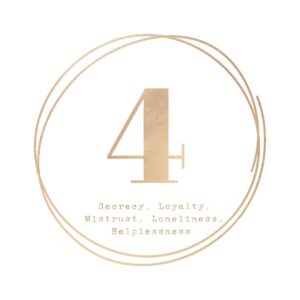 Often trauma is interpersonal, most often by a parent or caregiver during childhood, but it can also be in the form of spousal abuse and domestic violence. Prolonged and repeated interpersonal trauma has unique outcomes for victims. Often victims reside with and are trapped in the trauma, causing the survival brain to be creative in its efforts to protect, regulate, and go on with normal life (Fischer, 2014). Victims fear disclosing their abuse. Some fear sharing their abuse because it risks an increased threat to their life and safety; silence and denial are neurological mechanisms of survival (van der Kolk, 2015). Others choose secrecy, lacking trust in others to protect or rescue them. Children are naturally loyal to family, which becomes an engrained trait resulting in loyalty in adulthood—loyalty and fear fuel secrecy and mistrust, resulting in emotional and social isolation. The isolation ultimately causes the victim to feel lonely and helpless. Secrecy, loyalty, mistrust, loneliness, and helplessness are internalized, creating terror and panic in the body (p.135). The mind-body disconnection from trauma causes poor introspection. Ultimately, the weight and impact of internalized trauma result in externalized behaviors such as rage, defiance, shut down, and over-compliance (p.135). The victim’s price is a shattered sense of self, disconnection from their feelings, and pervasive mistrust (p.136). 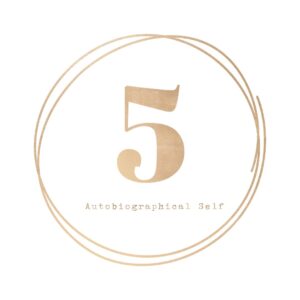 Memory encoding depends on the centrality of the memory to our lives and the amount of adrenaline secreted at the time of the event (van der Kolk, 2015; Wamser-Nanney et al., 2018). Event centrality is measured by the impact or changes an event has on one’s life and how central the event is to one’s identity (Wamser-Nanney et al., 2018). There is a positive correlation between high event centrality and PTSD, depression, and anxiety symptoms. Often, traumatic memory is a flashbulb memory; it is long-term, detailed, and accurate. However, if the traumatic event is too intense and too much adrenaline is secreted, the neurological system is overwhelmed and fails (van der Kolk, 2015). The cognitive frontal lobes and thalamus go offline, disrupting one’s sense of time and space, speech, and incoming sensations. The limbic area and the brain stem take control, fragmenting the autobiographical memory and impeding proper memory formation and encoding. Memories of events create a timeline and tell a life story. The cohesion of a life narrative is known as the autobiographical self (van der Kolk, 2015, p.238). However, traumatic memory lacks cohesion and fragments and sometimes creates wide gaps in the timeline. Finally, the victim is left with a lowered sense of self and weak identity, unclear about who they are to themselves or others. 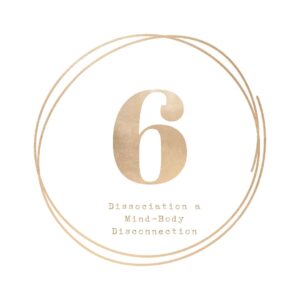 Dissociation is a cognitive-neurological symptom of trauma caused by the disconnected frontal lobes and emotional brain (limbic and brain stem) (van der Kolk, 2015). The sensory fragments are stored in the nervous system causing present-day triggers. Visual, emotional, physical sensations and cognitive beliefs can cause dissociation when the mind believes those sensory fragments of the past are being relived in the present and adrenaline is secreted (Shapiro, 2017). Dissociation takes different forms and is considered to occur on a spectrum. The manifestation of dissociation can range from spacing out; feeling numb; out-of-body experiences; dissociative identity disorder. Dissociation is a neurological survival mechanism that reacts to an overwhelmed mind that ultimately chooses to dissociate from the terror of the traumatic event (van der Kolk, 2015). The two primary forms of dissociation are derealization and depersonalization. Derealization is when one experiences themselves, others, and environments to be unreal. Depersonalization is the experience of observing oneself from outside of their body. Dissociative response serves a critical role in trauma: preventing autobiographical memory formation. Dissociation is an autonomic neurological self-preservation mechanism. The therapeutic goal for trauma treatment is to integrate or associate the sensory fragments into a cohesive autobiographical narrative with a demarcation between the past and present. 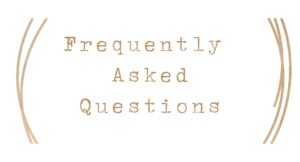 1. What is the difference between talk therapy and trauma therapy?

2. What can I expect during trauma therapy?

Trauma therapy is often a long-term process given the complexity of therapeutic goals, which include memory reconsolidation, emotional regulation, interpersonal trust and connection, and integration of the self. Trauma therapy will be interactive during most sessions, including body movement, EMDR, increasing self-awareness, self-compassion, and attunement to self and the environment. Trauma therapy utilizes neuroplasticity or the mailability of the brain. In order to heal the traumatized brain and body, homework will be provided between sessions, including yoga, mindfulness activities, diaphragmatic breathing, and life-skills development (van der Kolk, 2015). Work between sessions is critical to trauma recovery integrating therapeutic skills into everyday life while also strengthening the moving on with normal life parts of the survivor (Fischer, 2014). During trauma therapy, a balance is created between processing the past trauma while simultaneously building the present life.

Thompson, C. (2015). The soul of shame: Retelling the stories we believe about ourselves (1st ed.). IVP Books.

Van der Kolk, B. (2015). The body keeps the score: Brain, mind, and body in the healing of trauma (Illustrated ed.). Penguin Books.

About the Author: Allison Rose